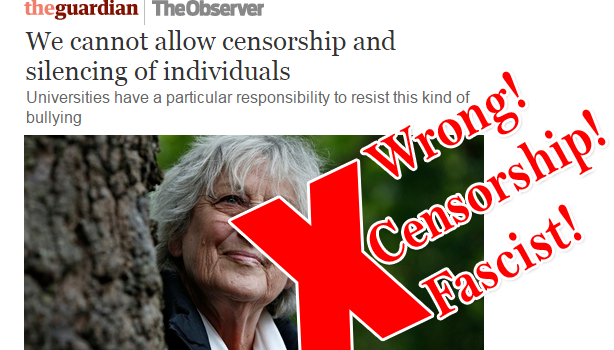 Some of you might remember that Germaine Greer, a TERF the Radical Feminist Andrea Dworkin took to task for trying to pass off patriarchy as feminism, made some small waves for appealing to the patriarchal vagina smell trope in order to claim that trans women aren’t real women. However, what’s making waves throughout the UK is that Green Party activist Beatrix Campbell, along with numerous other activists, are appalled that the trans community dared think they had the same rights as feminist or LGB activists:

UK Transadvocate ·
@UKTransadvocate
This is an old tweet, but it's evergreen. If you want to understand why the trans crits "work across the aisle" with social conservatives, this thread explains exactly why: https://t.co/qDs0uS4LT3
View on Twitter
Lisa T Mullin@LisaTMullin
For an unrelated reason I had to check up some things from Raymond's Transsexual Empire and had a quick re-read.
It is so bleak and anti-feminist it is not funny. It offers no hope of change for women, in fact women have to fight endlessly to maintain their existing position
1
1

UK Transadvocate ·
@UKTransadvocate
We really should listen to both sides. https://t.co/G760SHUvgB
View on Twitter
Charlotte Benton@C_J_Benton
Is @wesstreeting a sexual predator? It's time we had a respectful debate.
0
3

UK Transadvocate ·
@UKTransadvocate
Kind of weird how she claims that cis/binary is "conservative crap" considering who she works for & who transgender critical ppl align with. https://t.co/OpMcbtdPnf
View on Twitter

Another Angry Woman@stavvers
[cw terf screenshot, transphobia] While a lot of these people are no doubt engaging in bad faith, I always feel sorry for them, because at least some of them - maybe even most saying it - probably *aren't* cis, but aren't able to explore that https://t.co/3je1rSPXpe
1
1

UK Transadvocate ·
@UKTransadvocate
For many of them, the cruelty is the point. https://t.co/ZkSOlSFBty
View on Twitter
Jen 🏳️‍🌈🏳️‍⚧️💜🤍💚@Seinneann
Wow. I’m sitting here watching a group of GC Twitter warriors being deliberately cruel towards someone in the midst of a mental health crisis. Despite numerous pleas to stop, they are just goading and goading.

The gender critical movement is toxic and cruel.
0
11
Story Page