The TransAdvocate aims to improve the lives of transgender people through investigative news and nuanced commentary from a boots-on-the-ground trans advocate perspective. What sets the TransAdvocate apart is its commitment to publishing contextual pieces based on original investigative effort. In other words, we don’t simply repeat the news from other media sources, we report the news as discovered through actual investigative work and fact-checking.

Specifically, the TransAdvocate focuses on watchdogging media tropes and misinformation that gains social currency. We’re willing to do what it takes to expose hate — especially when hate is being peddled as reason, faith, or journalism. We here at the TrasnAdvocate generally won’t pull our punches and we are all too happy to drag the truth – kicking and screaming – into the light of day.

Members of the TransAdovcate Writer’s Collective doing what that do best: raising hell and doing good.

TransAdvocate.com was created in 2002 by Marti Abernathey. The TransAdvocate exists to give a voice to trans advocates in a new media environment.

The TransAdvocate: An Independent Nonprofit

Donate now to support the TransAdvocate

Organized in 1998, TFA is a Houston-based grassroots nonprofit organization that obtained its 501c3 nonprofit status in 2001. TFA was brought into existence through the hard work and support its parent organization, the Gulf Coast Transgender Community (GCTC) which traces its roots back to 1965. In addition to TFA, GCTC was instrumental in organizing pioneering organizations like the Texas Association for Transsexual Support (TATS) and historic events such as the International Conference on Transgender Law and Employment Policy. GCTC’s spirit lives on in the TFA mission of improving the quality of life for transgender people.

TFA facilitates numerous trans support groups and community events such as the Unity Banquet, now in its 24th year. Additionally, it maintains theTransgender Archive and the Trans Center, provides annual scholarships to trans-supportive academics, represents trans health concerns with health departments across the nation, trains organizations, companies, and schools throughout the nation and pioneered trans homeless, social, and medical services.

A Historical Perspective on Trans Advocacy

On one front we were fighting TERFs as they worked with US Administrations to try to institutionalize a national program of reparative therapy for all trans folk, revoke our access to health care, and to legislate trans people out of existence. On another front, we were fighting powerful gay men who felt that trans folk were dragging the gay rights movement down so that the founder of HRC, Steven Endean, encouraged the movement to “hide the drag queens.” On other fronts, we were facing systemic institutionalized discrimination at every level of society. On yet other fronts, we were fighting to just stay alive. At every level and in every way possible, both our foes and those who were supposed to be our allies made existence harder. The system was rigged to ensure that it produced a disenfranchised, demoralized, and dehumanized trans population with some of the highest rates of murder, rape, assault, unemployment, HIV, homelessness, psychological pressure and, of course, suicide. This is what the trans advocate movement has spent the last 50 years pushing against and now – finally – the trans community is at a tipping point.

Filed under: TERFs are conservatives: https://t.co/zv0Hvw8a5s
View on Twitter 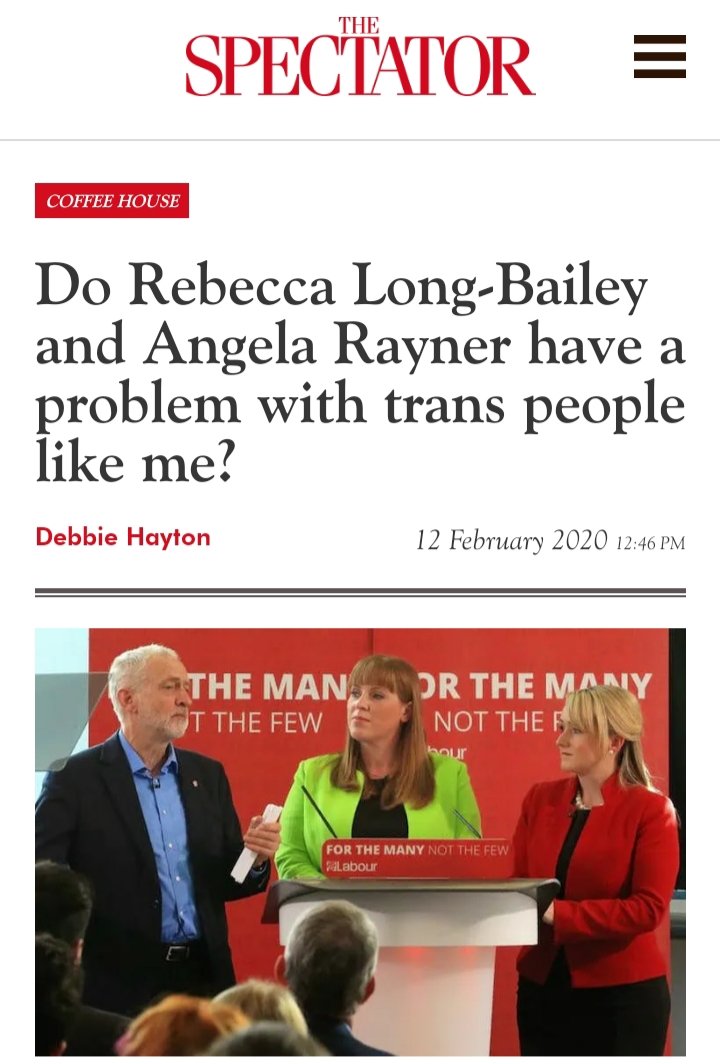 Joss Prior. 🍄'bluebird in my heart' @joss_prior
Imagine the Tory owned spectator telling labour how to run their party.... and some desiccated gormless tw@ joins in as though they represent anybody but themself.

Yes Debbie, we all have a problem with you. Except the right-wing amazingly... https://t.co/DOYQ8DRWKX
0
1

Will transphobia be tolerated in the @UKLabour party? Depends on who the leader is https://t.co/2XHEs8Aghr
View on Twitter

I feel really bad for cis women that wander into the #ExpellMe hashtag and make a pro trans comment. https://t.co/Z762xgxp4K
View on Twitter We know self-ID won't have an impact on cis women, since it's already in effect in Ireland (and many places around the world). You don't have to have long drawn out hypotheticals, it's not a mystery. https://t.co/7e6ELv9bAM
View on Twitter
1
5

Listening to a great program about @Schofe coming out on @LBC with @mrjamesob & it's mostly great... but JOB inferred repeatedly that kids today can't understand what it's like to see a toxic media. They understand because they see it with the trans community EVERY SINGLE DAY.
View on Twitter
4
14