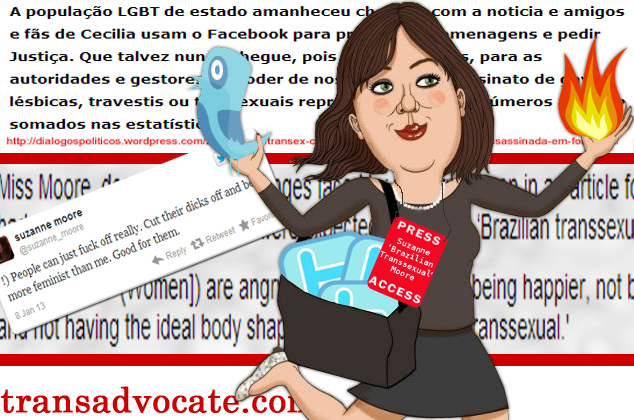 After all, the Julie Birch Ill Society probably just cheers whenever a transsexual woman gets ‘cut out.’

It’s being reported that a transwoman has been shot dead in Brazil.

According to the ‘Guerrilla Angel Report’ blog site, it is claimed the victim, named by the site as Cecilia Marahouse, worked as a performer and that the shooting took place near Fortaleza, north-eastern Brazil, on 11 January 2013.

She is described as being a “well known” figure among the area’s LGBT community.

Earlier this week, British journalist Suzanne Moore apologised for suggesting women were expected to look like “Brazilian transsexuals” in an article published first in the New Statesman and then in the Guardian newspaper.

Yes, I largely gave (and still give) Moore a pass on her original comment– even if not the best wording  to use it really wasn’t transphobic; the racial specifier was what I (and many other people) actually had the most problem with initially, and then of course  she dug  herself a Todd Akin-esque hole using Twitter for a shovel.

What say you now, Suzanne?

Tags: feminism, in the media 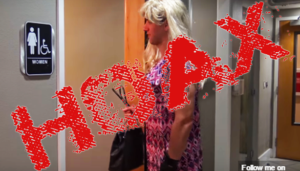 UK Transadvocate ·
@UKTransadvocate
This is an old tweet, but it's evergreen. If you want to understand why the trans crits "work across the aisle" with social conservatives, this thread explains exactly why: https://t.co/qDs0uS4LT3
View on Twitter
Lisa T Mullin@LisaTMullin
For an unrelated reason I had to check up some things from Raymond's Transsexual Empire and had a quick re-read.
It is so bleak and anti-feminist it is not funny. It offers no hope of change for women, in fact women have to fight endlessly to maintain their existing position
1
1

UK Transadvocate ·
@UKTransadvocate
We really should listen to both sides. https://t.co/G760SHUvgB
View on Twitter
Charlotte Benton@C_J_Benton
Is @wesstreeting a sexual predator? It's time we had a respectful debate.
0
3

UK Transadvocate ·
@UKTransadvocate
Kind of weird how she claims that cis/binary is "conservative crap" considering who she works for & who transgender critical ppl align with. https://t.co/OpMcbtdPnf
View on Twitter

Another Angry Woman@stavvers
[cw terf screenshot, transphobia] While a lot of these people are no doubt engaging in bad faith, I always feel sorry for them, because at least some of them - maybe even most saying it - probably *aren't* cis, but aren't able to explore that https://t.co/3je1rSPXpe
1
1

UK Transadvocate ·
@UKTransadvocate
For many of them, the cruelty is the point. https://t.co/ZkSOlSFBty
View on Twitter
Jen 🏳️‍🌈🏳️‍⚧️💜🤍💚@Seinneann
Wow. I’m sitting here watching a group of GC Twitter warriors being deliberately cruel towards someone in the midst of a mental health crisis. Despite numerous pleas to stop, they are just goading and goading.

The gender critical movement is toxic and cruel.
0
11
Story Page