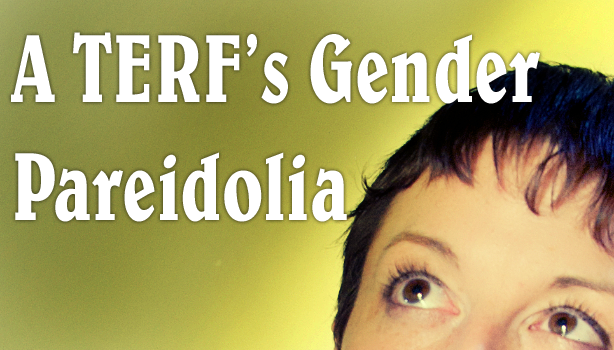 The appearance of Lavern Cox, a prominent trans woman activist and actor, on the cover of Time magazine was a great moment in trans advocacy.  Although Chelsea Manning was the first trans woman to be pictured on the cover of Time, the context of Lavern Cox photo was a bold statement.  Beside her name were the words, “The transgender tipping point: America’s next civil rights frontier.”

Sarah Ditum, a feminist journalist from the UK, reacted to the photo in a post on her blog.  Not only did she seem unimpressed, she mocked the notion that such a pivotal moment in trans advocacy represented “revolution”.

The revolution came to me as a hot woman on a magazine cover. The revolution came to me in high-high heels with legs totteringly crossed. The revolution wore a tight-tight dress, with breasts thrust forward and shoulders pulled back, facing down the camera but pouting seductively. The revolution’s hair was long, blonde and tonged; the revolution’s make-up was impeccable. In fact, this is what I think: if Laverne Cox on the cover of Time is the transgender tipping point, then it’s time to accept that trans politics and feminism have never been headed to the same place. Because Laverne Cox on the cover of Time does not look like a revolution to me: she looks like what women on the covers of magazines always look like. Beautiful, yielding, toned, sexy. The fact that she is a trans woman changes nothing about the kind of roles that women are supposed to perform in public life.

Ditum points out that women on magazine covers are often “Beautiful, yielding, toned, sexy”. This is true. The portrayal of women in media and the ridiculous unrelenting focus on women’s appearance is often criticized by feminists – and rightly so.

Sarah Ditum’s bizarre sexualized description of Cox photo, for example, degrades her personhood. In this respect, Ditum hypocritically commits the crime I once relegated only to straw-feminists, of shaming “the pretty girls” as if doing so elevates the rest of us.

The hope has often been expressed that trans women who are not conventionally attractive actors and models are given more of the spotlight. However, this is not what Ditum suggests. Instead, the beauty and femininity of Laverne Cox is presented as evidence that feminism and trans activism are not complimentary.

Certainly, if Laverne Cox had natural short hair, wore jeans and a button-up shirt, sensible shoes, and had a lip reduction – we could still all be friends?  Her commentary smacks more of “masculinity by default” than media criticism.

Portions of Ditum’s article could be read as simply asserting that trans advocacy and feminism are not synonymous. However, she goes well beyond that.  After dismissing and demeaning the depiction of a proud feminine trans woman of color on the cover of one of the most respected news magazines in the United States, she goes on to accuse “trans ideology” of being antithetical to feminism.

Cox on the cover of Time makes us question no assumptions whatsoever about women, other than the fact that they must be female. There is nothing here to frighten fetishisers of gender roles, so long as those fetishisers can absorb a few exceptions into their system on either side. Narratives of transition so often spin out from stereotypes: statements such as I knew I was a girl because I liked playing with dolls and wearing pink are commonplace. So too are statements such as we knew he was a boy because he didn’t like playing with dolls or wearing pink, because there are parents who would rather diagnose transness in their gender-rebel kids than face the stigma of raising a child who fails to fit. The fact that these stereotypes are mutable, and we live in an era of anti-feminist backlash attended by an astounding degree of apartheid in children’s toys and play, is ignored in the rush to medicalise difference.

Truth be damned there is such a person as a trans man that knits!

The lens through which Ditum viewed the Time magazine cover was distorted and problematic, but her odd view of reality, unfortunately, did not end there. She leapt from simply disagreeing with Laurie Penny, a fellow feminist journalist who believes that feminism and trans activism are “natural allies”, to parroting insultingly inaccurate descriptions of trans identity.

She brazenly and inexplicably accuses the parents of transgender kids of supporting their children’s transition to escape the “stigma of raising a child who fails to fit.” She uses examples that aren’t actual examples, but quasi-non-quotes placed in italics. She constructs a scenario where children are observed and assigned a gender based on their performance of gender stereotypes. In the mirror-mirror universe in which she lives, parents are lined-up outside of endocrinologist offices begging for puberty inhibitors because their 10-year-old girl scoffs at  “girl legos” and insists on wearing pants.

This is the dystopia that “trans critical” feminists fear, a repugnant nightmare scenario where gays are forced into transition in order to be straight or budding girl scientists are expected to transition to be literally “one of the guys”.  Soon after she published the blog post, Ditum retweeted the following from @stopblaminwomen a notoriously anti-trans account. 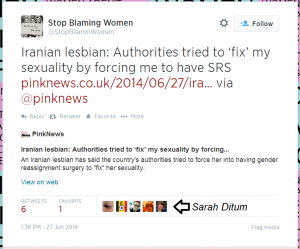 The link provided leads to an article that discusses the disturbing story of a cis lesbian in Iran who is being pressured to transition.

What appears to be happening, time and time again is that “trans critical” feminists such as Sarah Ditum are stumbling into an all-too-common fear-induced pitfall.  I remember clearly the same rhetoric being used to caution against the full acceptance and social integration of homosexuals.  While the average straight person would tolerate that “older unmarried woman” or “those two male roommates”, any push for even acknowledging that homosexuality was a “thing” was met with abject terror and the accusation that acceptance would lead to imposition.  “They are coming for your children!” and “They recruit!” were common talking points of anti-gay bigots.

This idea that trans activists wish to force transition-related surgeries on those who do not seek them or impose male/female/genderqueer labels based on societal concepts of femininity and masculinity – is a story born out of simple cultural inertia.

I am quite certain that, at this very moment as the trans-critical crew is reading this, they are desperately attempting to scour the internet for some example from an ill-conceived Tumblr or tweet among thousands that somehow proves me wrong.  Know that finding examples from some zine or police report of a gay person saying or doing something that fits in with the scare-narrative of your average hate-monger is something I remember too.

Confirmation bias, quote mining, generalizations based on anecdotes, collective punishment….is nothing new. The manifesto of “trans ideology” Ditum occasionally references is stuffed somewhere between the “gay agenda” and the “atheist conspiracy”.

So let me explain, as a mother living in the West, what reality is here.

I have a 7-year-old who, for about a year, refused haircuts primarily because haircuts scared him. Apparently, according to Ditum, it would be easier for me to force my child to transition instead of dealing with the “stigma” of being the mother of a long-haired boy-child.

I know damn well what parents who couldn’t deal with raising “rebel kids” would do. 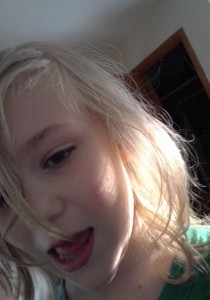 They would just cut it.

I knew I could do the deed while he slept. However, I heard a story, a long time ago, of a young teenage trans girl whose parents cut her hair while she was sleeping and she subsequently committed suicide. So, I couldn’t bring myself to do it, even though the situation was very different.

If a parent were seeking information about transgender kids, one of the first websites they would find makes a strong distinction between “gender non-conforming” children and “transgender children”.  The main criterion the website presents to know if your child is trans is not what toys they play with, but if the child persistently and adamantly insists that they are not the gender they were originally assigned.  It reads, “Gender specialists differentiate transgender from gender nonconforming by noting that a transgender child will assert firmly, over time, that their gender identity is the opposite of that which was assigned at birth. They will insist that they are in the wrong body, or that God made a mistake.”

But no matter, to Sarah Ditum there is no such thing as “gender identity” because she has not experienced it in the same way that she experiences sexual orientation. She does not find the evidence for this “element of the psyche” “persuasive”. She rejects the term “cis” (of course) because having rejected the concept of gender orientation she redefines the term “cis” as being “identified in your very nature with one of these [socially defined gender] roles”.

Gender is not a spectrum, it’s a structure – a binary with “man” superior and centralised, and “woman” inferior and othered. To be designated “cis” is to be identified in your very nature with one of these roles, through the accident of your genitals. It is to take a hypothesised element of the psyche known as “gender identity” or “brain sex” by trans theorists and give it the status of a truth, even though there is little-to-no evidence that such a thing exists.

I’m unsure why, in her view, it is the acknowledgement of gender orientation that will usher in a new age of medically enabled heteronormativity driven by regressive parents’ “rush to medicalize difference”.  If gender orientation exists in any form, coercing someone into transition would run the risk of inducing dysphoria.  This is one reason that trans activists tend to be strongly against elective genital surgery for intersex infants.  It is not “trans ideology” that would impose surgery on a lesbian in Iran, it is intense homophobia and the lack of respect for gender identity.

No worries, however, Sarah Ditum isn’t anti-trans! She writes, “I hope that [Cox] appearance on the front of Time gives heart and hope to people living with sex dysphoria.”  And, with a sentence or two, she provides herself with the ammunition she will inevitably use to accuse those who criticize her of attacking an ally.

In the end, Ditum reduces trans identities to either a pathology or a parental convenience. She reiterates the often TERF-hurled accusation that “trans ideology” supports gender conformity. She gives lip service to the photo of Cox being an inspiring moment in trans advocacy, and then immediately dismisses Cox as an object.

No, Sarah Ditum. That’s just what you choose to see. 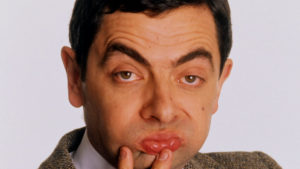 UK Transadvocate ·
@UKTransadvocate
Some of the #BlackPampers heroes. They're mocking #blacbloc anarchists for wearing masks, while they're doing the same thing on Twitter. Ironic, but not shocking. https://t.co/IefPBZSZJz
View on Twitter UK Transadvocate ·
@UKTransadvocate
amused that the (trans)gender critical feminists/supporters are outraged by blackbloc apparel at the Manchester protest. Mate, it's the same reason that these are your profiles:a https://t.co/SmulcJQeyb
View on Twitter UK Transadvocate ·
@UKTransadvocate
This is what trans ally looks like. (Thanks to @_banquos_ghost_ ). https://t.co/cDluS1WxMp
View on Twitter
3
9 Fraser Watt@Fraserwtt
The most “British Columnist” opinion I have ever seen. It is antisemitic to be pro-trans. My god https://t.co/X53Yt5PTwN
0
1

UK Transadvocate ·
@UKTransadvocate
This is something we cover ad nauseum, but there’s a reason for it. “(Trans)gender critical feminism” is a conservative movement that will impact cis and trans women (& trans men). It is supported by Tommy Robinson, Carl Benjamin, and most of the right wing for a reason. https://t.co/TatSv5O7cG
View on Twitter 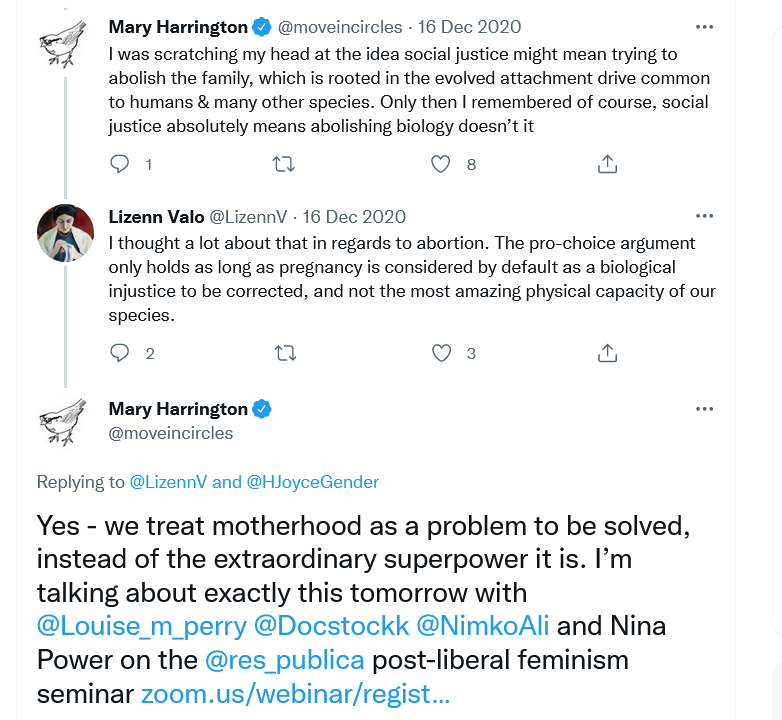 Ann Coates (she/her) 🦕🦖@setoacnna
Biological essentialism is THE key feature of 'gender critical feminism' and it threatens all women's rights. GCF depends entirely on defining women solely in physical terms, so reaches for 'birth is a superpower', which then leads inevitably to 'reproductive choice is wrong'. 🧵 https://t.co/TMuiGnoHjA
0
2
Story Page